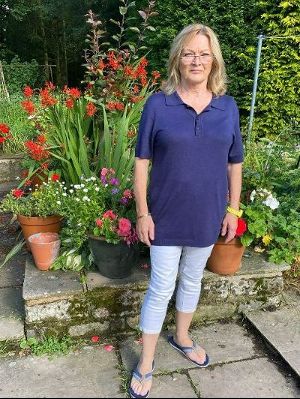 A retired teacher from Hoddleston in Darwen who had no signs or symptoms is urging people to say yes if invited to take part in the NHS Targeted Lung Health Check after a scan found she had cancer.

Cathie Bowker, 70, recently underwent surgery to remove the lower part of her right lung at Blackpool Victoria Hospital and is now on the mend.

Described as an ‘MOT for your lungs’, the NHS Targeted Lung Health Check (TLHC) is currently available to residents in Blackburn with Darwen, Blackpool and Rossendale who have been or are current smokers and aged between 55 and 74 in a bid to help diagnose more people with lung cancer earlier.

Cathie began smoking whilst studying at college in her early 20s and remembers it as something everyone did.

“I used to smoke at college when I was studying, mainly to ward off feeling hungry. It was something we all did, and I carried on smoking over 20 cigarettes a day for thirty years.

“However, I haven’t smoked in 20 years and I’ve always led an active lifestyle, with lots of walking and swimming. I had no symptoms whatsoever. I wasn’t short of breath and I didn’t have a cough, so I just never thought I had anything wrong with my lungs. Until I received the invitation to take part in the Targeted Lung Health Check it just wasn’t on my radar.”

The lung health check takes place in two stages. The first is an initial phone assessment with a specially trained health care professional. If the assessment finds the person to be at high risk, they are offered a low-dose CT scan of the lungs for further investigation.

“When I first received the letter inviting me to take part in the Targeted Lung Health Check programme, I wasn’t going to say yes because I had no symptoms. I’m pleased my husband convinced me to have the phone conversation though because based on my answers to their questions, they asked me to come for a CT scan in the mobile CT scanner at Blackburn Rovers Football Club car park.

“It was so straightforward. I was able to park the car easily and was in and out in 30 minutes. From there, everything moved very quickly. I had the first scan at the end of April and by 25 May I was having keyhole surgery to remove my lower right lung.”

“I’m getting stronger,  walking a couple of miles each day and eating well. I’m just glad I was asked to take part and that I said yes.

“I still require some further treatment, but I am so grateful to everyone who cared for me. I really feel like I’ve been given a second chance. A chance to spend more time with my grandsons who are three and one and the people who are dear to me. I hope more people say yes when they’re asked to take part in the Targeted Lung Health Check because it really does save lives.”

Lancashire and South Cumbria has one of the highest mortality rates for lung cancer in England and more than 17,000 people will be invited to take part in a lung health check in Rossendale alone.

“Being able to help people like Cathie is why we introduced the Targeted Lung Health Check programme. It helps diagnose cancer and other lung conditions sooner, and often when there are no symptoms.

“It is making a difference, but we need more people to be like Cathie and take part when invited. It is free and will help us catch issues earlier and save more lives.”

The programme is due to be rolled out in Burnley in September, with other areas of East Lancashire to follow. For more information on the Targeted Lung Health Check programme, please visit: https://lungcheckslsc.co.uk/